Cryptocurrencies and the war in Ukraine
11 March 2022

I understand HOW. I do not understand WHY. Of engineers and cryptocurrencies
4 June 2021

Everybody working in the financial system has an incentive to increase its complexity, including the regulators
12 April 2021

Riskometers and their inconsistencies
11 April 2021

What happens if bitcoin succeeds?
26 February 2021

Moral hazard, the fear of the markets, and how central banks responded to Covid-19
28 January 2021

What to do about the Covid financial system bailouts?
22 December 2020

The five principles of correct riskometer use
27 April 2020

The problem with Backtesting
25 April 2020

Systemic consequences of outsourcing to the cloud
2 December 2019

The dissonance of the short and long term
12 August 2019

My tiny, tiny contribution to Apple's fall in profits
6 January 2019

The hierarchy of financial policies
12 September 2018

VIX, CISS and all the political uncertainty
20 May 2018

Low risk as a predictor of financial crises
26 March 2018

Artificial intelligence and the stability of markets
15 November 2017

Do the new financial regulations favour the largest banks?
27 September 2017

Finance is not engineering
22 September 2017

Why macropru can end up being procyclical
15 December 2016

The fatal flaw in macropru: It ignores political risk
8 December 2016

On the financial market consequences of Brexit
24 June 2016

Everybody right, everybody wrong: Plural rationalities in macroprudential regulation
18 March 2016

Models and regulations and the political leadership
26 February 2016

Why do we rely so much on models when we know they can't be trusted?
25 February 2016

Does a true model exist and does it matter?
25 February 2016

Regulators could be responsible for next financial crash
21 July 2015

How Iceland is falling behind. On Sprengisandur
12 July 2015

Post-Crisis banking regulation: Evolution of economic thinking as it happened on Vox
2 March 2015

Model risk: Risk measures when models may be wrong
8 June 2014

Iceland and the IMF: Why the capital controls are entirely wrong
14 November 2011

How not to resolve a banking crisis: Learning from Iceland's mistakes
26 October 2011

Lessons from the Icesave rejection
27 April 2011

Valuing insurers' liabilities during crises: What EU policymakers should not do
18 March 2011

Risk and crises: How the models failed and are failing
18 February 2011

The saga of Icesave: A new CEPR Policy Insight
26 January 2010

Iceland applies for EU membership, the outcome is uncertain
21 July 2009

Not so fast! There's no reason to regulate everything
25 March 2009

Financial regulation built on sand: The myth of the riskometer
1 March 2009

How bad could the crisis get? Lessons from Iceland
12 November 2008

European banks and sovereigns are much more closely linked than American banks and their government. The resulting bank-sovereign doom loop has been gathering strength, since the 2008 crisis.

I was asked to discuss “disentangling sovereign and bank risk” at the European Supervisor Education Initiative conference in September 2017, and I summarise my contribution below.

Banks and sovereigns are joined at the hip, so to speak, and there is not much we can do about that. When things go pear-shaped, a banking crisis may well end up causing a sovereign debt crisis or vice versa.

Still, different countries find a way to quite effectively mitigate the problem and others not. The most obvious link is between bank holdings of their own sovereign debt and there are interesting differences across countries, as seen in the following figure, using data from the Bruegel sovereign bond holding database: 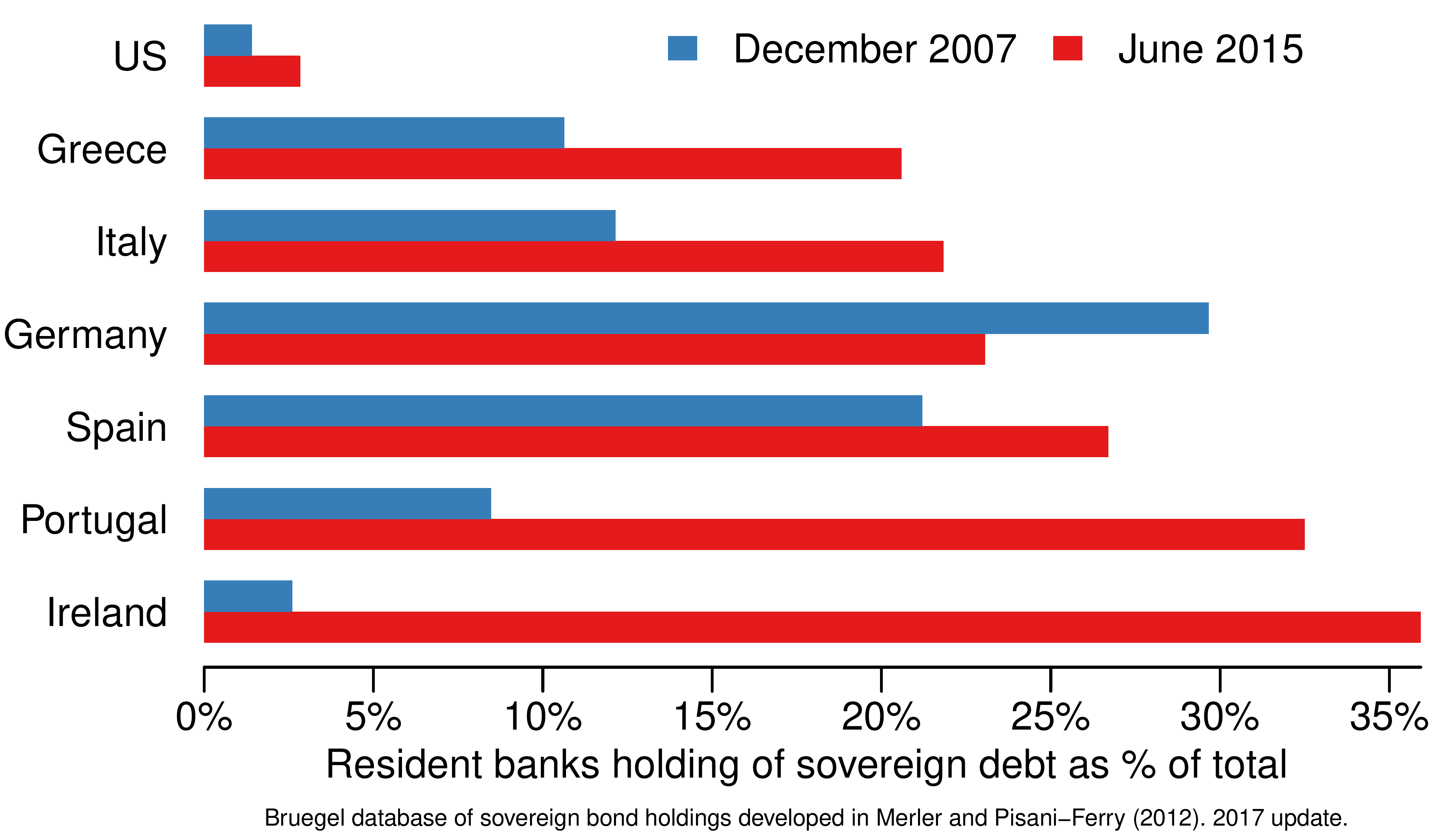 American banks hold less than 3% of their own government debt, a number that has only slightly gone up since the crisis. For German banks it is over a fifth. It is however the crisis countries that very significantly have increased their exposure to their own sovereign.

The root cause is the inherent conflict between the objectives of the relevant four policy domains, fiscal policy, monetary policy, macro and micro prudential. Add to that issues arising from immediate crisis resolution compared to long-run stability objectives.

Monetary policy wants to do quantitative easing, inevitably executed via the banking system and until recently needing European banks to buy their own sovereign bonds.

While there is no easy way for dealing with the bank-government doom loop, it can be mitigated by reducing banks’ holdings of their own government debt. Banks of course need to hold some safe assets, but there is no reason why Italian banks should not hold their safe assets in the form of German government bonds, except of course the Italian government needs someone to buy its own bonds.

Can the problem be solved by one of the the various schemes being promoted, perhaps Eurobonds or some CDO type structuring of European sovereign debt?

Leaving aside the obvious political problems, someone still has to own the bonds, and that is still going to be the banks, pension funds and insurance companies, not to mention the ECB itself.

If we create a CDO type structure, will any of the large buyers of bonds want to own the lower tranches? To experience losses if one of Greece, Italy, Portugal, Spain or France defaults? Would the micro prudential regulators be happy about that?

Even if we can find buyers, we still need to find a way to reform nonperforming economies. Otherwise, we just end up creating a future sovereign debt crisis, this one with much more serious consequences for European integration and more serious systemic consequences than the one we had over the past few years.

But then, we will not need these products in the first place. So why bother?

« Do the new financial regulations favour the largest banks?

Artificial intelligence and the stability of markets »