Cryptocurrencies and the war in Ukraine
11 March 2022

I understand HOW. I do not understand WHY. Of engineers and cryptocurrencies
4 June 2021

Everybody working in the financial system has an incentive to increase its complexity, including the regulators
12 April 2021

Riskometers and their inconsistencies
11 April 2021

What happens if bitcoin succeeds?
26 February 2021

Moral hazard, the fear of the markets, and how central banks responded to Covid-19
28 January 2021

What to do about the Covid financial system bailouts?
22 December 2020

The five principles of correct riskometer use
27 April 2020

The problem with Backtesting
25 April 2020

Systemic consequences of outsourcing to the cloud
2 December 2019

The dissonance of the short and long term
12 August 2019

My tiny, tiny contribution to Apple's fall in profits
6 January 2019

The hierarchy of financial policies
12 September 2018

VIX, CISS and all the political uncertainty
20 May 2018

Low risk as a predictor of financial crises
26 March 2018

Artificial intelligence and the stability of markets
15 November 2017

Do the new financial regulations favour the largest banks?
27 September 2017

Finance is not engineering
22 September 2017

Why macropru can end up being procyclical
15 December 2016

The fatal flaw in macropru: It ignores political risk
8 December 2016

On the financial market consequences of Brexit
24 June 2016

Everybody right, everybody wrong: Plural rationalities in macroprudential regulation
18 March 2016

Models and regulations and the political leadership
26 February 2016

Why do we rely so much on models when we know they can't be trusted?
25 February 2016

Does a true model exist and does it matter?
25 February 2016

Regulators could be responsible for next financial crash
21 July 2015

How Iceland is falling behind. On Sprengisandur
12 July 2015

Post-Crisis banking regulation: Evolution of economic thinking as it happened on Vox
2 March 2015

Model risk: Risk measures when models may be wrong
8 June 2014

Iceland and the IMF: Why the capital controls are entirely wrong
14 November 2011

How not to resolve a banking crisis: Learning from Iceland's mistakes
26 October 2011

Lessons from the Icesave rejection
27 April 2011

Valuing insurers' liabilities during crises: What EU policymakers should not do
18 March 2011

Risk and crises: How the models failed and are failing
18 February 2011

The saga of Icesave: A new CEPR Policy Insight
26 January 2010

Iceland applies for EU membership, the outcome is uncertain
21 July 2009

Not so fast! There's no reason to regulate everything
25 March 2009

Financial regulation built on sand: The myth of the riskometer
1 March 2009

How bad could the crisis get? Lessons from Iceland
12 November 2008

I just spotted an interview with the IMF representatives to Iceland about their policy prescriptions, and it did make for an interesting reading.

The interview is here in Icelandic.

My take on the Icelandic economy is here, quite different than that of the Fund. On two specific issues.

“The Fund is of the opinion that the Central Bank of Iceland ought to be ready to raise interest rates and tighten monetary policy. … The Fund has a clear idea of what interest rates should be”

This while the rest of world has interest rates of close to zero with inflation not too far from Iceland’s. The Fund just got it wrong.

In a smaller country like Iceland, when interest rates are increased, the interest differential attracts carry traders, so hot money flows in, leading to a currency appreciation. This has several impacts:

The resulting vicious feedback loop is why inflation targeting using the Taylor rule, what is behind the Fund’s position, is inappropriate for a country like Iceland. 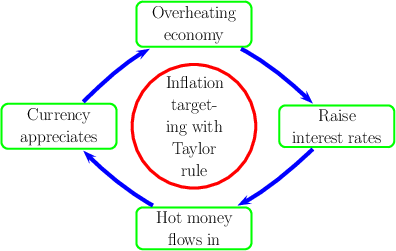 In my analysis of the Fund’s conditions, I wrote on VoxEU:

“Immediately following the collapse, the Icelandic central bank was forced to increase interest rates to 18% as a condition of a proposed $2 billion loan from the IMF. The IMF allowed Iceland to reduce its central bank interest rates in March 2009 and they remained in double digits until 2010. As inflation was 7% during that period, while the economy was sharply contracting, it is hard to see what benefit the Fund saw in implementing such orthodox monetary policy.”

Following the resolution of the claims of the foreign creditors of the fallen banks, the government quite recently came to own all the main banks. Obviously, they are to be privatized,

regarding the bank privatization, the view of the Fund is that “ the most important is for the government to be patient and find the right buyer… it would be best to find a solid buyer that is foreign with good reputation. The the process should take a few years”.

I disagree on the emphasis. When it comes to privatization, the government has two choices:

The government can either maximize the revenue from the privatization or maximize future economic growth. These two objectives are mutually exclusive.

The financial system in Iceland is highly oligopolistic, inevitable giving the small size of the economy. This implies high levels of rent extraction, as evidenced by the very high profitability of the banks. For the economy at large, this is quite costly and holds back on economic growth.

If the government wants to maximize the revenue from the privatization of the banks, it has to do so by enabling them to extract high future rent.

That however will be quite costly for households and firms, who would be much better served by a more diverse and competitive environment.

Because the government is now the effective owner of the banks, it has a unique opportunity to restructure the banking system to increase competition.

Of Brexit and regulations »